Tricolored Blackbirds, a grassland and wetland nesting bird, were once one of the most abundant birds in southern California. In the 1930s, scientists conservativley estimate the statewide population to have been between 2-3 million birds. Since that time statewide populations have steeply declined. The most recent triennial statewide survey revealed a 56 percent estimated population decline between 2011 to 2014, and an estimated 2014 statewide population of 145,000 birds. Reasons for this decline, current and historical, include habitat losses due to water diversion and wetland draining, and land conversion to agricultural and urban uses. Additionally, habitat sinks have been created at agrigultural areas where grain fields are harvested while young are still in the nest. Additionally, Also, with the diminished remaining habitat, predation impacts have increased from cattle egrets, coyotes, and ravens. Tricolored Blackbirds are colonial breeders which make them particularly vulnerable during the breeding season. The descruction of one colony can mean the reproductive failure of thousands of birds.

Tricolored blackbirds consume a wide variety of plant and animal foods and they respond opportunistically to the most abundant, readily available food resource (including grasshoppers, caterpillars, spiders, grains and seeds and sometimes snails and small clams). Native grasslands once used for nesting and feeding have been lost to urban and agricultural development. The majority of the Tricolored Blackbird population (~79% in 2011) uses agricultural fields as nesting habitat. This is problematic because some crops are harvested during the middle of the breeding season when there are eggs and/or young in the nests. As such the agriculture habitat is often a sink habitat detrimental to the species population. Additionally, traditional agricultural crops utilized by these birds are increasingly being replaced with crops that are not suitable (such as almonds and pistachios). Tricolored Blackbirds build their nests on a variety of substrates. Historically, most colonies were established in freshwater marshes dominated by cattails and bulrushes, with willows, mugwort, and nettles. Additionally, introduced mustards, blackberries, thistles, and mallows have been commonly used for several decades. Since the 1980's, the largest colonies have formed in grain fields (almost exclusively triticale, a wheat/rye hybrid) in the San Joaquin Valley.

In the Kern River Valley (KRV), Tricolored blackbirds nest in cattails, mugwort, stinging nettle, and Himalayan blackberry. Whereas most Tricolored Blackbirds winter on the California coast, in the KRV these birds winter in mixed-species flocks that forage in grasslands and agricultural fields with low-growing vegetation. The KRV is one of a few locations where Tricolored Blackbirds use natural and a mix of semi-natural habitat for pre-staging, breeding, post-breeding, and wintering. They forage and breed in wet and dry vernal pools, seasonal wetlands, riparian scrub habitats, irrigation ditches, and open marsh borders. They are site-faithful and will return to breed in the same locations year after year if the habitat stays suitable.

Starting in the fall of 2014, as part of a collaborative effort between multiple partners, SSRS oversaw the creation and enhancement of two wetlands areas in the Kern River Valley specifivally for Tricolored Blackbirds. Our goal was to provide annually stable, natural breeding habitat that would be unaffected by seasonal drought or agricultural crop management. The wetland restoration areas, at the Bob Powers Gateway Preserve and on the Audubon Kern River Preserve, are complete ands we hope they attract tricolored breeding blackbirds in 2017.

Additionally, as part of a separate restoration project, SSRS will be irrigating two grassland areas, over the next couple of years, to provide foraging habitat for tricolored blackbirds near the areas where we created and enhanced wetland nesting habitat. We are hoping these restoration efforts will synergistically benefit tricolored blackbirds by creating nesting areas and foraging areas.

The Kern River Valley has a unique tricolored blackbird population not dependent on the use of agriculture fields for foraging and nesting, and the area is used year round. The current drought has been tough on all wildlife especially wetland and riparian species. Our efforts are helping to guarantee water and nesting habitat during a severe drought some wetland areas. Reestablishing and creating breeding habitat could help increase the local population and provide long-term conservation for Tricolored Blackbirds by decreasing the number of birds reliant upon agricultural such as triticale. Recent research has shown that a large number of the Tricolored Blackbird population is found in the Southern Sierra foothills. Moving forward, we would like to identify areas for potential future restoration - for nesting and foraging. We will continue to survey for Tricolored Blackbirds by participating in the triennial state-wide surveys in mid-April. If you are interested in participating in these state wide volunteer based surveys you can find information at the tricolored blackbird portal website or you can contact Jenna Stanek at jestanek.ssrsATgmail.com. 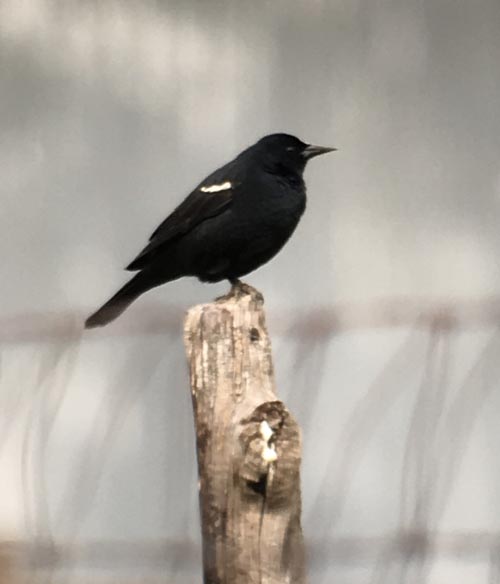 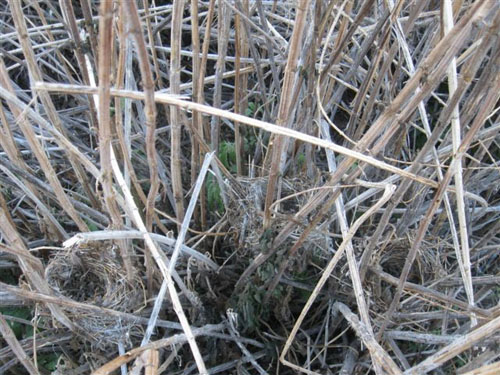 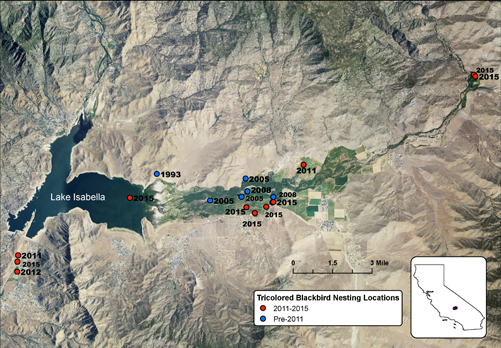